Robert Brandau Home on the Job

by Bob | About Robert Brandau | 0 comments 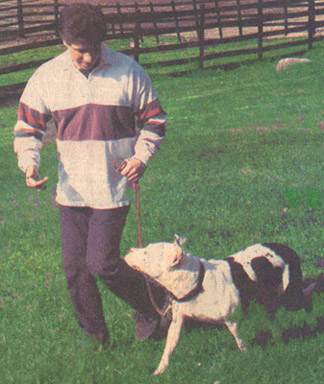 Talking to the animals

Robert Brandau talks to the animals and he says, “They talk back.” His world is crowded with them: dogs, chickens, ferrets, parrots, ducks, turkeys, hamsters and mice, at his Wantage home where he operates his home-based business, Canine Companions.

He’s 40, he says with a sigh, defining himself as a dog psychologist, a master dog trainer. It seems he believes we all exist in the same world and speak the same language.

A language he’s “translated” through developing a different approach to training his canine friends years ago. An approach he calls, “Kinship® Psychological Dog Training®,” a method accomplished exclusively with praise. Actually, Brandau says, “It’s the owner we train.” He teaches them how to talk to the animals.

One on one, in people’s homes, Brandau travels the tri-state area on an average week and he proudly says within 15 minutes he can train a dog to heel, come, lay, down and not jump up.

He claims, “Only 30 percent of the time do dog obedience group lessons work. What dogs need is to follow the leader. What do we want the animal to do? A dog needs relationship, has emotional needs, they are pack animals. We teach a dog what you want them to do, not what you don’t want them to do.”

“On the first night, I stop all their (owner’s) problems. I form that connection, rapport, then exercise it (with the dog). Part of a dog’s genetic code is that they need a leader.”

Brandau is light on his feet, talks exuberantly about his experience, education, and fame. A fame that started in his neighborhood when he was only 13-years old. He was a natural dog trainer; neighbors referred him and dozens of people brought their troubled pets for him to train. His decision to pursue training as a life’s work turned conviction when he visited the local pound where he grew up in Kinnelon and saw too many dogs were going to be destroyed because they weren’t trained properly.

Over the last three decades Brandau’s trained 25,000 dogs, a lot of canines in anyone’s checkbook when you consider he charges $150-$200 an hour, and earns about $150,000 a year. He reports that his clients say it’s money well worth the peace of mind, and unlike human psychologists, his work is guaranteed for a lifetime.

His fame has grown internationally; he’s regarded as an expert in and outside the courtroom, and the canine proof has been seen on major motion pictures, TV, networks and commercials. His trained dogs have appeared in “The Secret of My Success,” “See No Evil, Hear No Evil,” “Lady Beware,” “Kojak,” “The Equalizer,” “Spencer For Hire,” “Street Hunter,” “The Lady in White,” “The Pick Up Artist,” “Late Night With David Letterman,” a Colt 45 Malt Liquor commercial, and many others.

The best part of his vocation is doing what he loves, and doing it from home base, as if he struck a home run: “The best part is working from home with my four children. They are part of my business, learning responsibility, seeing how to earn money to pay the bills and buy the food. I control my own hours. I control my own income,” says Brandau. He adds, it’s afforded him time as well to rekindle an old love playing the guitar, writing songs and he now performs with his oldest daughter, Bobbie Anne, at various festivals throughout the country.

Along with professional confidence, Brandau expresses one of the necessary ingredients all successful entrepreneurs seem to possess a belief in themselves and in what they do.

He says, “I’m told I’m the best in the world. I am what I am; I do what I do because it feels right. I’m doing God’s work, caring for creatures great and small. I don’t know how to be anyone else.”